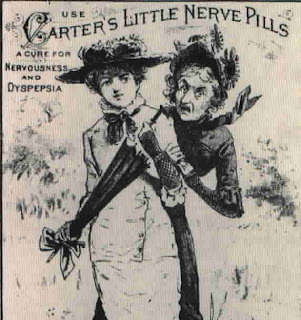 The meaning of Premenstrual Dysphoric Disorder

Premenstrual Dysphoric Disorder (PMDD) is a diagnosis that has been strongly debated for years. PMDD is a mood disorder linked with the luteal phase of the menstrual cycle, which occurs between ovulation and menstruation (Bobel, 2010). PMDD is intended to be applied to a woman who chronically experiences at least 5 of the 10 symptoms: depression, anxiety and tension, sad and crying, angry or irritability, lethargy, decreased interest in activities, appetite changes, insomnia, and physical symptoms such as swollen breasts, headaches, bloating, and weight gain (Lips, 2006).

Leta Hollingworth and the Study of Menstruation

Functional Periodicity:  An Experimental Study of the Mental and Motor Abilities of Women during Menstruation by Leta Stetter Hollingworth (1914) focuses on the notion that a woman is not psychologically impaired during menstruation. In order to test the hypothesis that women were significantly impaired during their menstrual cycle, she tested 23 women and 2 men as controls. The test consisted of perceptual and motor skills and mental abilities over a three month period. Hollingworth concluded that he data did not discover a period of mental or motor inefficiency in normal women during their menstrual cycle (Hollingworth, 1914).

In 1993, PMDD was included in the American Psychiatric Association’s Diagnostic and Statistical Manual of Mental Disorders (DSM-IV(R)). PMDD is designated as a research category instead of a diagnostic label; however, its corresponding code number allows clinicians to use it as an official diagnosis (Bobel, 2010). Elizabeth Kissling, author of Capitalizing on the curse: the business of menstruation, states that “there is still no known etiology for PMDD and no empirical evidence that it exists (Bobel, 2010).”

Research has shown that women who say they have mood problems premenstrually are more likely than other women to be in stressful life situations, such as abusive relationships or high-stressful work environments (Caplan, 1995). Dr. Ian Tummon, an obstetrician-gynecologist, has written articles suggesting that the term PMS should no longer be used (Caplan, 1995). He states that when his female patients visit him, they begin their appointment by saying “I have terrible PMS.” Throughout their visit, Dr. Tummon asserts that his patients never mention PMS, instead, they spend their entire visit talking about their relationship and worrying about their children (Caplan, 1995). In fact, Dr. Paula Caplan (1995) reports that there is a positive correlation between marital dissatisfaction and the reported intensity of PMS. Dr. Tummon declares that “women have serious problems and deserve to be treated with respect and offered help that is to the point. Diagnosing them as mentally ill will not do the job” (Caplan, 1995).

Stigmatization and the Loss of an Identity

Classifying PMDD as a mental disorder stigmatizes women and may have other undesirable social consequences. Emily Martin asserts that PMS and PMDD are rooted within the stresses of modern capitalism in western culture (Figert, 2005). In fact, she affirms that it is no accident that PMS emerged during the 1930s: “It strikes me as exceedingly significant that Frank was writing immediately after the Depression, at a time when the gains women had made in the paid labor market because of World War I were slipping away. Pressure was placed on women from many sides to give up waged work and allow men to take the jobs (Figert, 2005).